“On behalf of American Cinema Editors, it is with great sadness I announce the passing of our honored friend and mentor, Edward M. Abroms, Sr.

An award winning editor and dedicated father, Ed devoted his time and energy for nearly three decades to the service of the American Cinema Editors as a member of the ACE Board, and 17 years of that time as our Treasurer. He will be deeply missed but his legacy will remain.  Please take a moment to read a tribute to Ed from his Career Achievement Honor.”  Jenni McCormick 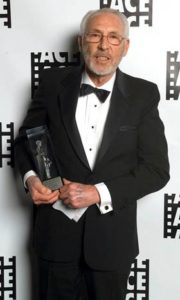 In their book Stay Tuned, television creatives Richard Levinson and William Link describe Ed Abroms as tall, thin and cocky: “Don’t call me a cutter. I’m an editor.” That was of course more than thirty years ago and though the cocky might have worn off, he is still tall and thin and still an editor in heart and mind even though he retired about ten years ago. Growing up in Hollywood as the son of parents who had nothing to do with the film business, he still got infected with the film bug and went to the USC School for Cinema. But the real film schools were the mailrooms of the studios where young film talent learned about the business by wondering through the departments delivering mail and making contacts. A degree from USC was not the piece of paper that would open doors to a career in film and that realization made Abroms drop out of college, get a job at the mailroom at Republic Studios and save his parents’ substantial money.

From there he went to work at Technicolor where he met his wife of forty-eight years, Colleen, who has always been his sounding board and advisor. Eventually he was made an apprentice at Review Productions (now Universal Studios). He worked his way up from apprentice, assistant editor, and dialog editor to (after begging editors to give him sequences to cut) editor on the television series Tarzan. Ed explains, “That’s how I got into the film business, persistence and knocking on doors.” In 1969 he teamed up with director Lamont Johnson on the television movie Deadlock who later that year asked him to edit My Sweet Charlie.  Levinson and Link remember saying, “Johnson will be unavailable to make his director’s cut, so now the final choices are up to us and Ed Abroms.”  They recall, “Abroms suggested a way to make something powerful out of Charlie’s truncated death scene: freeze the frame and hold for a long moment as he’s shot. Allow the audience to be saturated with the harshness of the event. After the frame is frozen, the camera moves in on him closer, and closer.” (This move-in was accomplished optically.) Upon winning an Emmy for this production, people suggested he take up directing.

Levinson and Link, who started the Columbo television series remember, “We asked Ed Abroms if he would supervise our editing and his contribution was invaluable. He inserted amusing optical effects, energized the pacing, and whenever any actors—including Falk—got an advanced case of the cutes, Abroms left it on the cutting room floor. In gratitude we assigned him the last episode of the season to direct and he was the only director to bring us in on schedule.” He received an Emmy nomination for directing. Universal then signed Ed to a six-year contract as a director. In 1972 Columbo earned him an Emmy nomination for both editing and directing – and Abroms took home the editing trophy that year.

Throughout the seventies Abroms edited and/or directed television series such as Kojak, Cannon, The Six Million Dollar Man and of course Columbo. In 1973 he again teamed up with Johnson to edit That Certain Summer, which garnered Emmy’s for producing, writing, directing, editing and acting. Then Steven Spielberg, with whom he had worked as an editor on the pilot for Night Gallery in 1969 asked him to do his first theatrical feature The Sugarland Express. It was Ed’s fourth-theatrical feature and although that could have been the start of his career with Spielberg, he went back to directing television series.

Between 1971 through 1981, Ed directed fifty television films. He decided to give up his directing career and retreated back to the editing room. He explains, “The editing room was my first love. I found as a television director in most cases you’re more or less a traffic cop. You’ve got a schedule, you have to shoot so many pages a day and as far as the editing is concerned you don’t have a lot of input.” Being an editor afforded the opportunity to edit films abroad: England (Jewel of The Nile), Australia (Street Fighter), and Toronto, Canada (The Guardian). Once again working for Livinson & Link, the HBO movie The Guardian, merited Abroms the Cable ACE award.

In 1983, Blue Thunder garnered Abroms an Oscar nomination (with co-editor Frank Morriss). He edited Sam Peckinpah’s last feature The Osterman’s Weekend and officially retired in 1994 after completing Street Fighter with Jean Claude Van Damme. Throughout his career the trade paper critics praised his contributions to the films he edited.  To quote Ed: “Today the caliber of critics who write reviews for movies and television has descended to the point of no mention of the editor, which is a sad commentary as to their lack of recognizing what superior editing contributes to a film.”

But Ed Abroms’s story isn’t complete without mentioning the legacy he has passed on to his three children. His son Ed is an editor in his own right. His daughter Lynn is a sought after assistant editor, and daughter Cindy is an accomplished Colorist who works in television and features. Lastly there are Abroms’s continued invaluable contributions to ACE. In 1985 he became involved in the annual ACE Eddie Awards and apart from a two year hiatus abroad working on the Herculean task of completing Street Fighter, he has been in charge of producing the film clips.  Also, his many years serving as treasurer on the ACE Board of Directors is his generous contribution to the spirit of giving back to the community of editors he still is very much a part of.