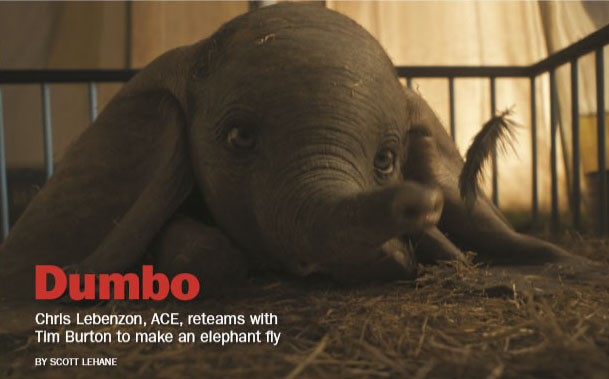 Two-time Oscar®-nominated editor Chris Lebenzon, ACE, has worked on almost every major Tim Burton movie since 1992’s Batman Returns, building a close working relationship and a mutual trust with the director through such films as Ed Wood, Mars Attacks!, Planet of the Apes, Charlie and the Chocolate Factory, Sweeney Todd: The Demon Barber of Fleet Street, Alice in Wonderland, Frankenweenie and Miss Peregrine’s Home for Peculiar Children. With more than 36 film credits dating from 1976, Lebenzon was nominated for the editing Oscar for his work on Top Gun in 1986 and Crimson Tide in 1995. He has also been nominated for six ACE Eddie Awards, winning two for his work on Burton’s Sweeney Todd and Alice in Wonderland.

CinemaEditor spoke with Lebenzon while he was in the final stages of finishing the March 29 release.

CinemaEditor: When did you get involved in this project and where were you based?

Chris Lebenzon: I started in June of 2017. The entire movie was shot on sets at London’s Pinewood Studios. This is because it required a lot of visual effects to create an environment, to create the world. I don’t think there was one outdoor shot, even though a lot of the movie takes place outdoors.

We also worked at Cardington Airfield, which is getting very popular. It’s the biggest stage in the U.K. Chris Nolan did some of the work on one of the Batman films there as well. It’s a huge hangar that was used in World War I to launch zeppelins. 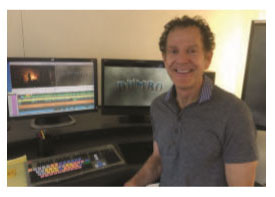 CL: I edit what we’re shooting that day. When each shot is finished, it is sent right into the Avid and by the end of the day the scene is cut. Sometimes there are two or more scenes a day depending on the production schedule. The dailies are conformed the next morning. I make adjustments to the scene before the new day’s shots are loaded. But in this particular case Dumbo, our main character, is not yet in the movie. He and his mom are fully CG. There were actors in green suits in the wide shots portraying Dumbo and his mother.

Sometimes there were plates for their close-ups and sometimes not. I would overlay a title that described what Dumbo should be doing. The chore became integrating him in a way to achieve the most emotionally-satisfying result. It’s a matter of focusing the story, getting the most I could out of the characters, hitting all the emotional beats and fine tuning the relationships. That’s what we as editors do on any movie, but the added task here was placing Dumbo in where we needed him to get the most out of the scene and his character.

CE: What system were you editing on?

CL: I used Avid Media Composer 8.8. Part of my request on the movie, because I’ve done so many in England, was to be home more often and the studio and the director obliged me, which was very kind. I had a system here [in L.A.] and a system [in the U.K.] throughout post-production. There was an ISIS system here to store the material and one in London. It was great for me because with the time-zone difference, at the end of my day I could give my assistant some duties and when I got to work the next day they would be done. 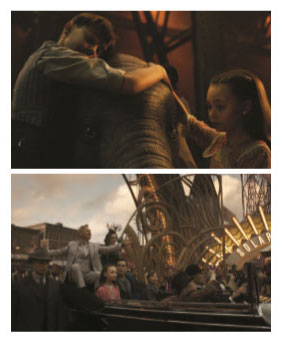 CE: How would you describe the editorial style that you were trying to achieve?

CL: This is a movie primarily for families with young children. So, I tried to channel the 10-year-old version of myself which to be honest wasn’t very difficult. I had a very collaborative relationship with the studio; they have a lot invested in this project. So I would implement their notes and review their suggestions and Tim and I would discuss their views and adopt what felt right.

That was an ongoing process and there were previews that guided us in terms of what the audience might expect and point out the deficiencies thatwe had to address. We’ve had a lot of time in post-production to step back and look at what it is that we were doing and how effectively it was connecting. As Dumbo’s look became more refined, the movie as a whole took a different shape which suggested other ideas on how to make it better. We were editing all the way until the last day of final dubbing.

CE: When you were cutting, did you use pre-vis or post-vis to mock up videos in the edit?

CL: We did, though this director doesn’t particularly follow previs. It’s just a springboard for ideas. I did ask for post-visualization shots of Dumbo doing something simple to place in the cut as a guide. It helped to crystallize a scene instead of looking at a plate with a banner that simply says “Dumbo” or “Mrs. Jumbo.” It was a good starting point for discussing what the character should be doing.

CE: What is it like working with Tim Burton?

CL: He’s a very familiar entity for me and no doubt I am for him. So there’s the comfort level and understanding of what each other can do. I can complete his sentences, which happens a lot because he doesn’t always finish them. And he’s very intuitive so he can read my thoughts before I express them.

It’s a lot of fun working with Tim. He’s more interested in design, really, as an artist, and every shot becomes a kind of painting. Sky replacements are a major issue on all his movies. He’s very careful with composition and atmospheric detail and works hard to create a world like no other.

CE: How hands-on is he in the editorial process?

CL: Tim’s a very big-picture director with all of his departments. He’s not that guy that sits behind me and micromanages or talks about frames or wants to watch different versions. In fact, sometimes I do different versions and he can’t tell the difference.

He generally comes in to see the scenes, discuss his views and leaves. Then I can interpret and implement his thoughts. After a screening, we breeze through the cut, discuss our issues and he leaves me to it.

CE: Tell me a little bit about how you work with music. Did you use temp tracks? 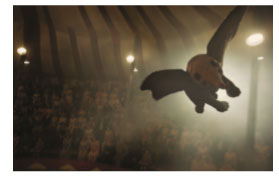 CL: Definitely. I had temp tracks during the shooting and we’ve used them as a guide and continued with that through postproduction, which is always helpful. I try not to add music too early. I’m just too busy and until the movie takes shape it’s hard to pin down a musical style that’s appropriate. If I can I’d just as soon wait until a music editor starts but that isn’t always possible.

There are some directors who don’t like the crutch of temporary music because it may make a scene look better than it really is and then you get the real score and you’re disappointed. It’s that
‘temp-love’ syndrome that composers agonize over. But it’s helpful for me. Mostly, it’s a service for the studio. I don’t necessarily need it and the director doesn’t need it but it does present the movie in a better light.

CE: Tell me about the role that your assistant editors played in the process.

CL: I had Keith Mason and Nick Davis in London and they were with me on the last Tim Burton movie that I did out there (Miss Peregrine). They worked very hard during shooting to get me the shots immediately as they were filmed and it was tough to do that. All the takes get loaded right into the system, and it was quite a drill. They came in early and then they’d have to come in early the next day to conform the dailies and over-cut the scene. And then I had my visual effects editor, Tom Kemplen.

He started with me 10 years ago. He was very helpful as always. On a lot of VFX shots, we’d experiment with blow-ups, speed changes or do camera moves to improve their impact. There’s so much work in England that it’s hard to get your crew back or even get new people. There are no small American movies being made there. They’re all the big tentpole movies that employ a large crew so it’s hard to find assistants. I also had my always-reliable American assistant, Joseph Kirkland, stationed in L.A. 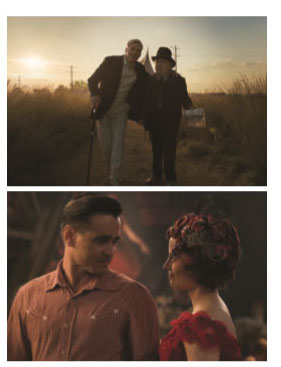 CE: So overall, what have been the biggest challenges that you faced on this film?

CL: Well, for one, when you’re on a movie for a year and a half, it can be challenging to maintain your interest. But I didn’t find it hard because it was a dramatic movie and then it became an animated movie when we were working with Dumbo so it morphed into a blend of two genres in terms of one’s approach. Getting Dumbo to do the right things so you could feel for him was one of the bigger challenges. And we had to be very careful of how much we showed of him. We didn’t want to overexpose the main character too early. We had to achieve the balance of showing him just enough to want more. We didn’t even want to show him flying too much because then there’s no buildup to the next time he flies. Keeping the audience wanting more of Dumbo was both fun and challenging.

CE: What’s your main takeaway from this film?

CL: This is the kind of movie that can be made better and better in post-production because we could add moments of the main character whenever it felt right. I was very fortunate to be involved with something like this because generally, you are limited by what a director shoots. In the case of Dumbo, it didn’t matter that we didn’t have a plate or a specified angle for our main character. We could create shots that helped propel the story, elevate the drama and elicit the emotion.