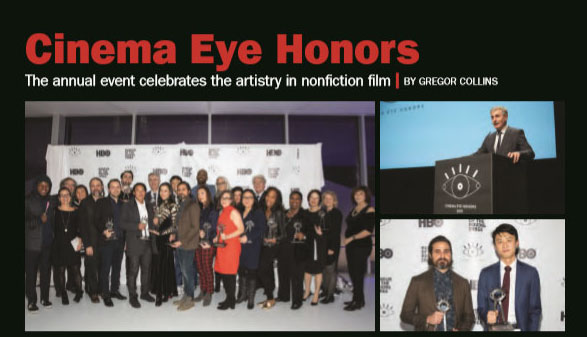 Two-time Oscar®-nominated documentarian Steve James knocked it out of the park in his trademark breezy style, making the evening even more impactful. Nominated for an Oscar last year for his film, Abacus: Small Enough to Jail – but losing out to the similar sounding Icarus – James kicked off the evening with an anecdote: “I have a theory,” he began, slightly resentfully, “Icarus won only because people meant to vote for Abacus and they accidentally voted for Icarus.”

At one point during James’ opening monologue, a security guard’s radio went off. James paused and woefully peered out at the giddy crowd finding it thoroughly amusing. They eventually quieted. “That’s sad that that was the funniest moment of the evening,” he deadpanned. The crowd exploded.

Clearly making stirring documentaries isn’t the only thing James has in his tool belt. Minding the Gap, director Bing Liu’s autobiographical portrait of friendship, won best debut feature film, outstanding achievement in direction, and best editing for Joshua Altman and Liu. With seven total nominations for the evening, the film tied the record for most nominations in Cinema Eye Honors history.

The award for outstanding achievement in nonfiction feature filmmaking went to Hale County This Morning, This Evening.

Free Solo snagged the trophy for best achievement in production, best cinematography (Jimmy Chin, Clair Popkin and Mikey Schaefer), as well as the Audience Choice Prize. As she clutched her statue with husband and co-director Jimmy Chin in tow, Elizabeth Chai Vasarhelyi put the crazy ride in unique perspective: “You know, we would never have asked him (Alex Honnold, the star of the film) to free solo. We couldn’t. We just had to wait and be ready.” After Vasarhelyi and Chin walked off stage, James squeezed in this zinger: “What they did with that greenscreen in that film was amazing.”

Best nonfiction film for broadcast went to Baltimore Rising. Outstanding achievement in an original music score went to Ishai Adar for Shirkers. Additionally, the film won for outstanding achievement for graphic design or animation. The Spotlight Award went to The Distant Barking of Dogs. Director Simon Lereng Wilmont walked up flanked by Oleg Afanasyev, the 10-year-old star of the film. “I owe everything to this little guy and his grandmother,” is all he said before walking off stage.

Host James won for best drone footage, and for best nonfiction series for broadcast, for his docu-series, America to Me. The Heterodox Award – recognizing work that blurs the line between fiction and nonfiction – went to American Animals.

Eyes on the Prize – the affecting 1987 PBS television series about the Civil Rights Movement in the United States – took home the Legacy Award.