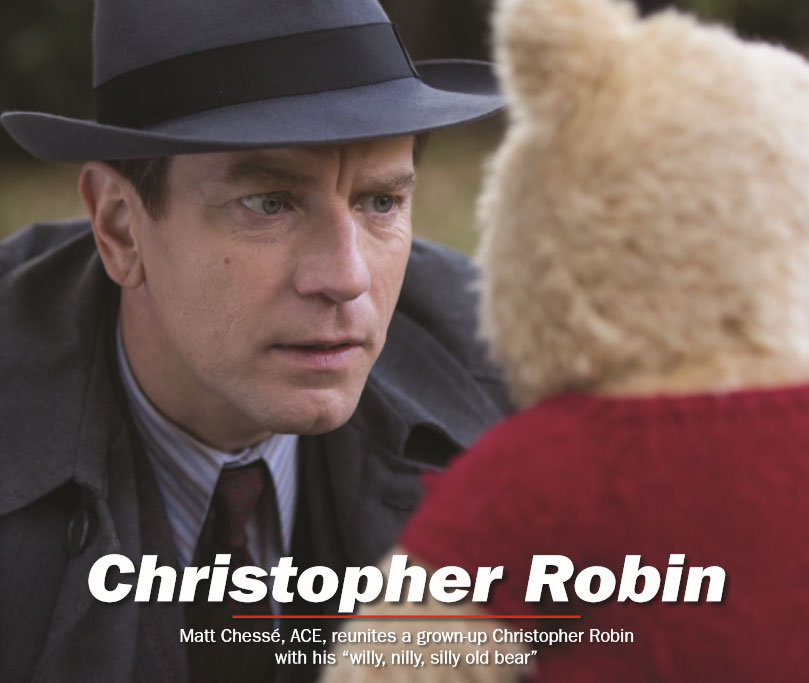 Disney’s Christopher Robin, which opens Aug. 3, tells a new, original story about two indelible characters that have entertained families for generations: Christopher Robin and his childhood friend, Winnie the Pooh.

They’re the creation of English writer A. A. Milne, who wrote a collection of stories based on the characters, the first of which was published in 1926. In Christopher Robin, A. A. Milne’s stories, along with Benjamin Hoff’s 1982 book The Tao of Pooh (which uses Milne’s characters to explain Taoism) were the main inspiration for the film, which is set in a 1949 post-war London where grown-up Christopher Robin (Ewan McGregor), caught up in an adult world, finds the joy in life again when he reconnects with Pooh Bear (a CG character voiced by Jim Cummings, who also voiced Pooh in the animated works).

To make this motion picture, director Marc Forster reunited with Matt Chessé, ACE, with whom he had worked nine times previously, including on Finding Neverland, which earned Chessé an Oscar® nomination, and The Kite Runner. As with those films, the emotional core of Christopher Robin is the relationship between the main characters – in this case, Christopher Robin and Pooh. The grown-up Christopher Robin, Chessé explains, has been through the war, got a job and started a family.

“He’s a lovely everyman – a hardworking father, and if he has any shortcoming, it’s that he is working too hard and maybe lost sight of what his true priorities should be.” Then he reconnects with Pooh, who remains “simple-minded but wise.” The editor admits that as the father of two, he found Christopher Robin’s character to be very relatable, and as such the performance wasn’t too hard to find. 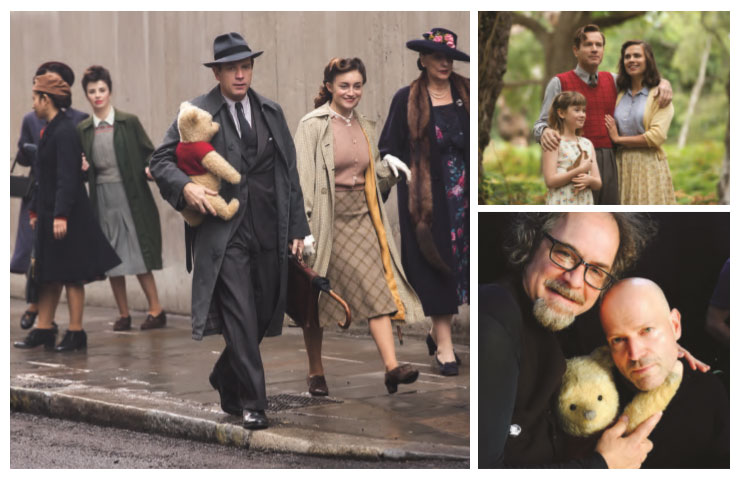 “As a dad, it easy to shape a character that you wish would slow down and take more time for the good things in life,” he says. “There were conversations that I have had with my own kids even during the making of this film – where I’ve said, ‘I can’t come away this weekend. I have to work.’ It’s directly from the script. It was easy to find the truth in the scenes.” While that always comes down to storytelling, the process of developing a central relationship between live-action Christopher Robin and a synthetic Pooh Bear, also had technical considerations, and so Chessé was involved throughout the production, even with previs work completed at The Third Floor before principal photography began. The live action in the movie was lensed by cinematographer Matthias Koenigswieser in the U.K., on location (including in Windsor and London) and on stages at Shepperton Studios. The CG characters including Pooh Bear, Kanga, Roo, Piglet, Rabbit, Owl and Eeyore were brought to life by London-headquartered VFX house Framestore.

For production they used toys, or ‘stuffies,’ of what would be CG characters, puppeteered and voiced by actors on set, to give McGregor someone to interact with during filming. “The first couple takes they would block the scene with the stuffies and actors,” Chessé explains. “

Then they’d put in a proxy for VFX – a grey or blue version of Pooh. Ewan would continue to deliver the performance with something that was easier to remove in post. I would craft a scene based on the dailies like you normally would. If I had a take that involved the stuffie, I could still use the performance and they would erase [the stuffie] in post. So it was a really organic process.”

Of developing the relationship between Christopher Robin and Pooh, Chessé says, “That was the thing that was the most familiar to me in terms of working on films like Finding Neverland. It’s about emotion; almost like a child-and-adult relationship.

The evolution of their characters and their growth were the core.” But other CG characters from the Hundred Acre Wood required additional work in during post. “There were some instances where some of the critters were a little underwritten,” Chessé relates. “It worked functionally in the script but when we put them up on the screen everyone fell in love with the characters and we wanted more of them. When the characters were together on screen, there were multiple opportunities to brainstorm.

In a couple instances we brought the writers back and made new lines around situations that we made up in the cutting room. “The big challenge editorially was not to go crazy with that, but to allow just enough play for those scenes and the right lines and beats – and then move on to the story that we needed to tell. It was challenging but it was a really fun thing to do.” Chessé’s team included first assistant Matt Sweat (it’s their third film together) and second assistant Matt Allen (who was a TA at AFI when Chessé recently ran its editing department).

“He proved to be such a talented editor on campus, and was already such a key part of the teaching world, that when I started doing previs on Pooh in the spring of his second year at grad school, I just dragged him along with me. “I had too much to do on campus and on the soundstage combined and I needed a sidekick,” Chessé continues. “He dove in on every level.

I was not able to take him to England on the shoot, but I held his slot for when I came back [during post-production]. It just goes to show that you never know who you are impressing.” Chessé calls Sweat and Allen his “dialogue Sherpas. Due to the intense amount of ADR and recorded character performance – and the necessity of providing animation with the best take and tracking the changes or potential re-selection of each line of animated character dialogue – the guys were essential to the process.

They were cataloguing, archiving and shepherding every vowel and consonant on and off the screen.” He also commends VFX editor Catherine Chase and VFX first assistant and additional VFX editor Brad Besser. “This team did a similar job guiding and guarding the development of each character’s movements and facial performances, in conjunction with the post-vis and final animation. It required intensive attention to the details of every paw movement or brow wrinkle as it related to a vocal delivery, body language, continuity, lots of granular stuff.” For Chessé, this was also a very personal project.

“I come from a long line of puppeteers, my grandfather was a marionette artist and my uncle is a puppeteer,” he says. “I always felt that editing had a bit of the puppeteer in it, because you are taking people’s image and voice and putting them in situations and making them talk to each other when they aren’t really talking to each other. This has come a lot closer to anything I have done before in terms of puppeteering.”