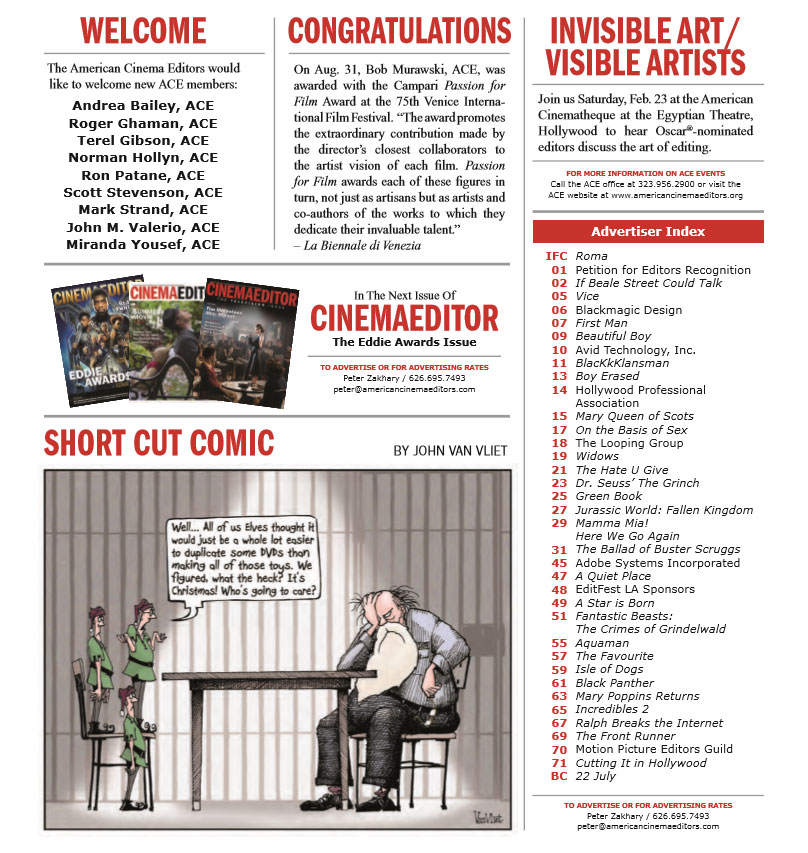 Avid is bringing back AskAvid event in LA

Following our successful inaugural evening event in 2017, we invite you to join fellow members of the post community, Avid executives and Avid product management for the 2018 sequel.

During the evening you will hear, and hopefully engage in, open and lively dialogue on the trends, challenges and successes within post production today directly from the people who are developing and using the Avid suite of production tools to create and make some of the most exciting content available.

Don’t miss out, places will be limited so register today and use #AskAvid to send in any questions you have,

Cuts We Love – Out of Sight 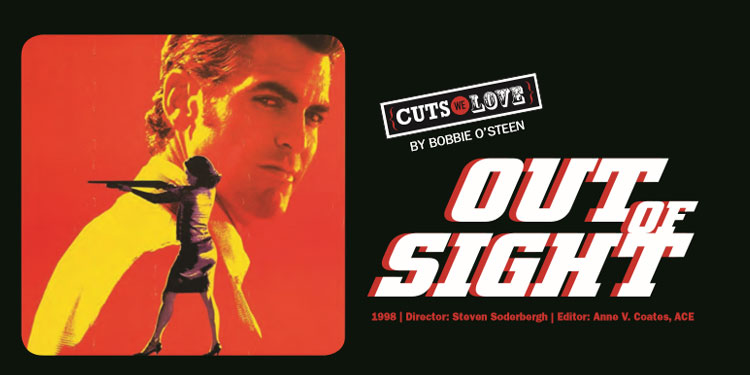 Anne V. Coates, ACE, who always relished the opportunity for a challenge, said in a 2016 interview, “When I first worked on Out of Sight, I knew that Steven [Soderbergh] did things in a fairly far out way so I said to him, ‘Stretch me.’ He wanted to try things, experiment in the cutting room, and I was looking forward to that. “Coates and the director made highly effective, sometimes audaciously stylistic choices that fully displayed the wit, satire, colorful characters and often absurd situations of the Elmore Leonard novel that the film was based on. And in this scene, in particular, the artful banter and charged chemistry between the charismatic leads, Jennifer Lopez, playing Karen, a Federal Marshal and George Clooney as Jack, a bank robber.

When we first meet Karen, she happens to be outside a prison that Jack is escaping from and ends up as an unlikely hostage, squished next to him in the trunk of her car. (Figure 1) The banter and mutual attraction begins and, after Jack manages to get away, Karen spends approximately the next hour of the film in pursuit of him. And that moment when she does finally meet up with him, at a hotel, is considered one of the most iconic and brilliantly edited sex sequences in film history.

The innovative approach to that sequence – intercutting and making time jumps back and forth between the bar where they meet and the hotel room where they end up – was not planned. As Coates explained, “It started in the bar, he sits down and talks to her and they start flirting and then the scene in the bedroom was only shot silently because it was going to have the dialogue from the first scene laid over it. Although I don’t think we were ever going to lay a whole heap of dialogue on it because it worked so well in the bar. So I cut the two sequences completely separately, the bar scene with all the dialogue, the one in the hotel room just with music.

Then we got the idea, Steven Soderbergh and I sort of, between us, really, started intercutting, we just tried one or two things and it started to gel, flashing back, sometimes we flash forward. I would say, ‘Let’s do this and cut from here with the hands,’ and he’d say, ‘Let’s try overlaying the dialogue here,’ and we just did it, and it was really exciting. We had a lot of fun doing it.”

The scene starts with Karen in a hotel bar, having come to Detroit to find Jack. A couple of traveling salesmen hit on her and she brushes them off, and then another male appears unexpectedly behind her. It turns out to be Jack, in a tuxedo, no less. Right away they get into classic Elmore Leonard repartee, first playing a fake fantasy date routine. (Figures 2, 3, 4)

Then the discussion turns to what’s at stake: Will she fulfill her duty and arrest him? Or should they just go for the moment and have no regrets. The opportunity “may only happen two or three times in your life,” says Jack. (Figure 5)
“Or once,” says Karen. (Figure 6)
“Or once,” says Jack. (Figure 7) (Figure 8)
Camera pans down: (Figure 9) His hand touches hers: (Figure 10).
Hotel room: first flash forward and first touch. (Figure 11)

Coates said, “Freeze frames started when we introduced new characters. That was in the script, then it went on and we started experimenting, using it in different ways. It’s never really long freezes, just a few frames to heighten the sexual tension between the two of them. It’s not about the number of frames but what worked out emotionally. Sometimes they were very short, sometimes they were a bit longer, but were all kind of noticeable. They really don’t have any logic to them. For me it was a feeling you can’t explain.”

What follows is a sequence of silent shots, intercut between bar and hotel room, the edits motivated by looks and touch. (Figures 13, 14)

Back to bar: They talk about how he found her there, his interest in her, etc. (Figure 19) The distrust and danger then comes between them. Karen, “For all you know I could’ve had a SWAT team waiting for you,
why would you trust me?” (Figure 20)

Second freeze frame in middle of shot when their lips almost touch. (Figure 24)

Hotel: Several dissolves of them, different takes, in profiles. VO continues about their first encounter, “You kept touching me, feeling my thigh,” she says. “But,” he says, “in a nice way.” (Figure 26) They finally kiss.

Bar: Just when we think we’ll finally stay with them in hotel, dialogue about first meeting – when she’s his hostage – resumes. Karen, “You know that Sig [gun] you took from me … What were you gonna do with me?” (Figures 29, 30)

Bar: They discuss subsequent sightings of each other after first encounter. (Figures 33, 34)

Hotel: VO continues for both Jack and Karen, as they confess to have wondered up until now what it would be like if they
met again. (Figures 35, 36)

Bar: Karen says, what if they take a “time out” from their cop-and-robber chase. (Figure 37)

Jack says was hoping for the same thing: (Figure 38)

Silence, as they playfully throw back bed covers. (Figures 48, 49)

Coates discusses this last freeze frame: “I put one in where he is just about to seduce her on the bed, literally the day before we cut negative. ‘I just felt we needed one more,’ I said to Steven. He said, ‘Do it, let’s have a look at it,’ and he liked it, so we kept it in.”

They kiss repeatedly. The final release and the longest shot in sequence – as is the final freeze frame. (Figure 56) Fade to black.

After arguing about how they each may have just used each other Karen says, “I just wanna know what’s going to happen.”

Jack leaves the hotel, and the Sig pistol he had taken on the pillow – although Karen ultimately ends up arresting him. (There is a hopeful twist: She introduces him to another prisoner and master escape artist!)

Coates also stated another editing truism: “I think with those scenes, this is very often true, that you get it pretty well right the first time. Obviously, you go back and do little titubations and things, but if you don’t get those very difficult scenes right the first time, you just get wronger and wronger.” Well, she got this right, as she confirmed proudly, “It tells the story, it’s very emotional, it’s very sexual.”