Black Mirror: Bandersnatch has been heralded as a landmark achievement not just for Netflix but for the future of interactive programming for its fun and challenging ability to include the audience in the story.

In the series, viewers follow a young programmer, Stefan (Fionn Whitehead), and are given choices to make as he proceeds to adapt a fantasy novel into a video game.

Not for nothing did series creator and show writer Charlie Brooker set this in an Orwellian 1984. But with five possible endings and seemingly unlimited unique permutations of the story according to Netflix, imagine the byzantine task of editing it all.

Tony Kearns was invited to the project by director David Slade with whom Kearns had worked on Black Mirror, series 4 episode 5, “Metalhead” and decades previously on music videos including Muse’s “Bliss,” Stereophonics’ “Mr. Writer,” and Tori Amos’ “Strange Little Girl.”

Since their early collaborations Kearns had graduated to feature film (Cardboard Gangsters, Let Us Prey) and acknowledges he was less well-known for TV drama.

“My experience on ‘Metalhead’ with David, Charlie and (series co-creator) Annabel Jones worked out really well and I think they trusted that I could do it.”

When Kearns boarded, the treatment and script were already advanced. “As far as I was concerned it was always an interactive film but the challenge was to create a satisfying single story that would work without any viewer interaction and to deliver on all the other narrative arcs.”

Kearns first task was to go through the script and break it down into constituent parts. This was accomplished using spreadsheets of his own devising, graphics visually representing all the interconnected paths and Twine, a scripting software that allows interactive options to be embedded as links.

“It looks like a normal script but when you click on the options the page will move forward to that branch of the narrative. All of this scared me a little. It was dauntingly complex but after I broke it down into sections and spent time getting my head round it I had no real concerns. My feeling was that everyone else had done their homework and Charlie had written a brilliant script so it wasn’t difficult to resolve any questions I had.”

That said, it was only once footage came in and Kearns could stress test the assembly that it was possible to assess where there might be issues. “The first obvious point to make is that the story does not travel in a smooth arc. It is interrupted by choice points. It made sense to first assemble the arcs in the sections between choice points of which some are quite long and fluid. Then we were also able to look at various narrative lines using Branch Manager to view the film on our laptops.”

This software, specially written in-house by Netflix, enabled the import of segments which, when coded, would play back as a facsimile (or proxy) of the finished piece. “It would start from the beginning and you’d come to a choice point, click one and proceed down that route,” Kearns explains. “It was very complex and very essential. We wouldn’t have been able to make the show without it since it simulated the viewing experience rather than us trying to assemble a timeline in Premiere Pro.”

Also essential was assistant editor John Weeks who, as fate would have it, had prior experience with computer programming. “It was one of those fortuitous occurrences but not only is John an excellent assistant editor he has such a wealth of experience in coding. 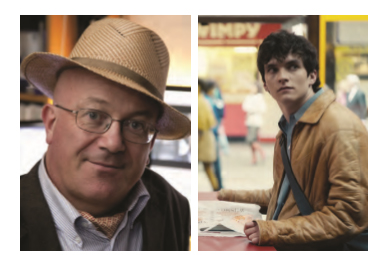 It was a bit of a rod for his own back since he was doing the job of two people and, like the rest of us, he was a bit frazzled by the end.”

Weeks’ role shouldn’t be underestimated. Indeed, Kearns recommends that anyone embarking on an interactive show – of which there will no doubt be many more – should assign someone with a knowledge of coding to the edit suite.

Each viewer choice led down a rabbit hole of different narrative tracks with a version of a scene that may differ from another only in one crucial aspect. “The scenes would be generally shot the same way but the performances would be different,” explains Kearns. “A line or two of dialogue might change or there would be another twist dependent on the viewer choice. For example, the first viewer choice asked them to pick a brand of cereal so we’d insert a commercial on the TV screen in a later scene for either Frosties or Sugar Puffs.”

The soundtrack to the drama is also a viewer choice on a couple of occasions. “The first music choice concerns what Stefan should play on his cassette recorder and in both cases the cut’s exactly the same but in a later choice choosing album tracks between ‘Tangerine Dream’ and ‘The Bermuda Triangle’ we had to retweak a little to ensure the cuts of the scene hit different musical beats.”

The script was 157 pages (usually the hour-long show runs 65 pages) with 250 segments generating nearly five hours of footage. “Each segment had a four-character alphanumeric number. The script was divided into eight sections and then variations on that segment denoted by letter and number, for example 7A2B. This was translated into the shooting script then managed by script supervisor Marilyn Kirby along with first assistant director Jay Arthur. “Marilyn was our linchpin on set and everyone’s oracle when it came to knowing what we were going to do next. Both she and Jay did an amazing job marshalling the actors and the crew and keeping them on the right track.”

The choice points themselves were around 15 seconds in duration with additional time on either side of the choice allowed for the caching or buffering needed for each choice point. “In reality we only had one short segment where we had to extend duration due to this requirement,” Kearns says. “Charlie wanted to avoid having everything stop while this was going on so he wrote dialogue and action to go under the choice points so it’s a visually continuous process. 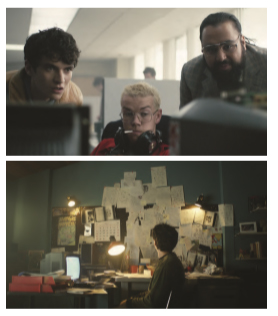 It was my job to work out how to not interfere too much with the choice points and also ensure the last shot of that segment cut well with [the] first of the next segment, whichever was chosen.”

Along the way, some choice points were dropped in order to make the whole story more fluid. Some of these occurred in scenes set in the office but none of the choices were deemed too important structurally by the team. Kearns says, “A lot of the time was spent viewing all the multiple narrative arcs, assessing, making structural changes but once in the swing of it I was able to intuitively make decisions about what would work.”

A personal favorite scene is one during which Stefan drops acid in Colin’s (a video game developer played by Will Poulter) flat. “It’s the core of the film really since Colin rants to Stefan –but also to the audience – about free will and having personal choice at the same time we realize that Stefan has no control over his fate since that is in the audience’s hands. Will Poulter’s performance is very compelling and it was a pleasure to edit.”

Aside from requiring a person with coding experience on your team, Kearns says his advice for preparing to edit nonlinear shows is to be “well organized and to have good communication so you can keep control of what’s [happening] on set. Understand that the review process will be a long process and that you have to think in several dimensions. The trick is not to get lost.”