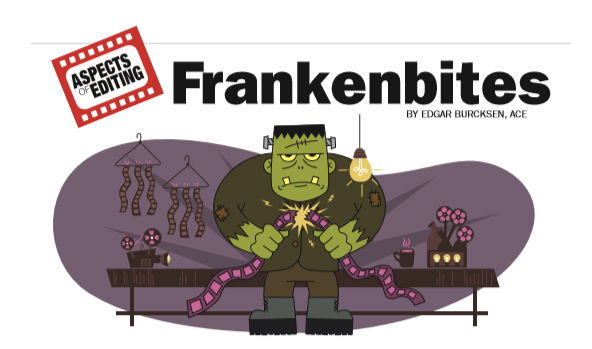 As editors we have awesome powers that are not often talked about although we all know and use them whenever we see fit. Mostly, we always talk about our creative powers and how we use the art and craft of editing to shape our productions. But these creative powers also contain an ingredient of manipulation that we often use to further the quality, impact and enjoyment of the product.

And I’m not talking about the formidable power of choice that we use to create performances in narratives or sequences in documentary and reality programs: Whichever take we deem suitable to move the drama, narrative or intellectual argument forward can make or break a sequence in the eyes of the director, producer and ultimately the audience. Apart from just choosing we also have the power to exclude, omit or delete clips, shots or sequences either because we consider them redundant, unnecessary or wrong for what the motion picture is trying to tell or argue. Now we’re getting closer to the manipulative power of editing – because editors cannot only leave something out, we can also add something that was not originally meant to be there. We’re able to ‘steal’ shots from other sequences and insert them in a sequence that misses a look or reaction that we need to make the drama work: In documentaries we can use a sunrise that was shot on a different day, week, month or even year to open a sequence in a certain location or we might even find a stock shot that will do the same trick.

When you’re editing a TV series the ‘stealing’ of shots or clips becomes an easy solution to help a sequence or performance since there can be an abundant library of material that an editor could have access to if they can only remember what has been done in previous episodes; the same goes for reality or non-scripted shows. When I edited The Young Indiana Jones Chronicles – the only TV series I ever worked on – I didn’t have as many opportunities as I wished to steal because all the episodes were dealing with vastly different locations and periods, but it did happen.

Doing shows that emerge from one location with the same cast in the same time period of course creates more opportunities to do a lot of stealing especially if the shooting has time limits and the script has story problems. But stealing shots still falls within the parameters of what is considered the original content of the sequence it was put in.

However, you can also use shots to create sequences that were never scripted and create dialogue with lines from other sequences to create an apparent missing link in the script. In the Young Indiana Jones episode, “Austria, March, 1917,” I created a new sequence in the train at the border of Austria that did not exist. I used earlier footage of Young Indy in a dark train cabin that did not show his face so I could insert any dialogue I needed to explain a missing plot line. In ADR the actor would revoice my temp dialogue to make it innocuously fit into the episode.

In the changing reality TV world where the ‘reality’ not always carries enough drama to make a show or sequence interesting, they come up with all kinds of ‘creative’ ideas to heighten the excitement by rewriting dialogue, revoicing the unknowing participant and, if it does not fit into the mouth or the temperament of the performance, then they can even blur or defocus the face giving the impression that the recorded person did not want to be recognized or did not sign the quitclaim. This kind of manipulation seemed far-fetched to me until I recently started editing with a director who had worked years in reality TV as an editor and he told me bizarre and hilarious stories of how they tried in the editorial process to make the shows exciting when
the reality was boring.

Although these stories were entertaining coffee break tales as we were editing a documentary, it became something more tangible for me when he urged me to ‘frankenbite’ a piece of dialogue of one of the characters in the film. I had never heard the term before but when he explained that it meant manufacturing a line of dialogue with elements of other lines (like manufacturing a person with body parts of other people in the cinematic classic, Frankenstein), I realized that I had done this many times before in feature films.

When, for instance, an actor says, “I do not like to tell you I love you,” you can make him say, “I like to tell you I do not love you” by moving the words, “do not,” in the sound track; you have to make sure, of course, that you can’t see him saying the line by putting it on the reverse angle looking at the person he is talking to, on a wide shot, extreme close-up of only his eyes, in the dark or whatever trick in the book you can come up with as long as you obscure his lips saying the words. Sometimes I could even put words in actors’ mouths if the lip movements of what he was actually saying fell in line with what I wanted him to say.

In drama these editorial tricks are protected by the narrative of what the film is about; but what about the ethics of using this kind of manipulation in reality-based shows and documentaries? You have to realize that you’re not reporting news that has a definite ingredient of veracity that you cannot escape and even though objectivity seems to be a victim of the 24-hour news cycle, at least most of the major networks are still trying to adhere to the ingrained code of letting both sides of an issue have their say. Most of the time as a documentarian you already have taken a side on a certain subject and you’re trying your best to inform and convince the viewer of the importance of the arguments you’re showing, whether it’s a political issue, a scientific, historical or artistic subject, or any other topic that you can imagine to make a film about. But does that allow you to massage the realness of what was recorded?

We’ve heard how the documentarians of The Center for Medical Progress made films about the ‘baby parts’ Planned Parenthood was supposedly selling. By manipulating video and audio in such a way that it seemed that employees of Planned Parenthood admitted that selling parts of aborted fetuses was a regular practice at the clinics, they almost were able to torpedo funding for the organization. So, as an editor, you have to be critically aware of what the constructive and destructive powers are of your craft. You have to scrutinize the depth of your commitment to a project and the cause it is advocating, highlighting or criticizing. When I edit documentaries I do not even want to touch the territory of ethical challenges because I make sure that the ‘frankenbites’ I manufacture are always strictly connected to the actual content of what a character was saying or arguing.

Although actors are trained speakers for narrative and scripted shows, the common public is not always blessed with that smooth speech ability. So as editors, especially for documentaries, we have learned to help our subjects out by removing their ‘uhs,’ their ‘you knows,’ their ‘I means’ and other impediments that blur the content of what they’re trying to communicate. However, these little stopgap speech interjections are not the only obstacles. People often speak in unfinished sentences or repeat themselves before they come to a conclusion.

This is where the ‘frankenbite’ becomes a very handy tool to smooth out a sentence. The “I was really, I mean, devastated, because you know I felt like upset and devastated by this behavior” turns into “I felt really upset and devastated by this behavior.” What the character wants to communicate stays the same but by cleaning up the sentence you even make her or his statement more compelling. You have to be, of course, keenly aware of volume levels, speech cadence and intonation; closing your eyes when you play back your ‘frankenbite’ usually tells you if what you were trying to do actually works. When you have transcribed interviews at your disposal that is also very helpful because in the ‘Find’ menu on your computer you can search for the words or pieces of lines that will be appropriate to reinvent a sentence. How you fit this line into the picture editing is the next challenge, but as an editor you have many tools available by using B-roll, cut-aways or listening shots. The final check if what you did is acceptable will be when you’re screening the film for the people you interviewed; I have never had anyone tell me that “this was not how I said that” because we all think that we’re more eloquent than we really are.

It does not often happen that as an editor, you’re confronted with ethical issues and the morality of the tools you’re using to tell a story or make an argument. But what are the boundaries of what is responsible and irresponsible when you’re telling a story that is not based in fiction but deals with people and situations that are connected to the real world? Can you change what people actually said into what you had hoped that they would have said? Especially when you’re working in documentaries, there’s a fine line of what is ethically responsible and morally acceptable. Even if you’ve taken a side, it does not mean that you can throw away all your scruples to draw the viewer into your camp. And although I’m sure that as consummate editorial professionals we will never lower ourselves to that level, it is something about which we absolutely need to be vigilant.