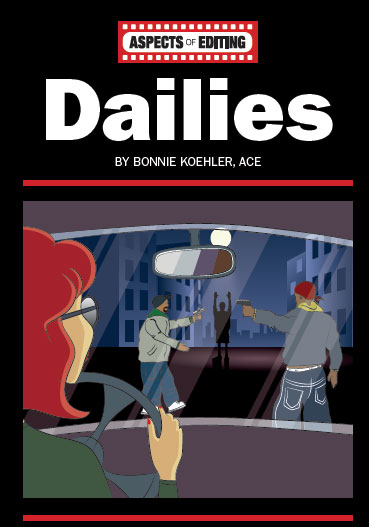 Editor’s Note: Our “Aspects of Editing” column has, until now, been my soapbox to bring to the readers’ attention an eclectic mix of personal experiences, theoretical musings and shameless self-promotion.

Then Bonnie Koehler, ACE, an accomplished colleague with years of experience and a knack for writing about her personal and professional experiences, asked me to read some of her essays that she was planning to assemble into an upcoming book. I was really impressed with her stories, especially how engaging, witty and original they are in their look at the complicated world of editing and how it affects an individual who loves the job of telling stories. So CinemaEditor decided to broaden “Aspects of Editing” to involve more authors. Bonnie will be the first one to share this column with me. I’m excited to share this space with other editors and get to know their inspiring, educational and philosophical thoughts about an art we all love and to which we have dedicated our professional and sometimes (unfortunately?) personal lives. – Edgar Burcksen, ACE

Late one night as I was leaving the Sunset Gower lot in Hollywood, the locked gate rolled open to reveal a man some distance in front of me, walking down the driveway of the apartment building across the street. His body language emoted bone-chilling terror. He was in the shadows and the neighborhood was dark and deserted. His was the only movement in the landscape. He was staring at something in front of him as if in a trance, hypnotized, slowly raising his hands. As I drove onto the side street, my headlights splashed across the walking man. I stopped to watch the way he lifted his arms in slow motion, unfolding in mirror images of each other, as graceful as Tai Chi. His footsteps were measured and submissive. My eyes registered the stiff, slightly off-axis tilt of his head. I thought to myself: That’s just how you would move your body if someone were pointing a gun at your head. Very real. This actor is good. It was late, maybe 3:30 a.m. or so, and I had been watching dailies in my dark cutting room for 15 hours straight. It was the spring of 2009 and I was editing my second season of the one-hour drama, In Plain Sight, inspired by the U.S. Federal Witness Protection Program. It was a project I found particularly compelling; I responded to the cast, the writing, the setting.

Before there was Breaking Bad, we were shooting in New Mexico and using the haunting American Southwest as our backdrop. This night I had gotten swamped by a tsunami of film. An ill-prepared director had pointed three cameras every which way on our desert sets and used them as butterfly nets to fan the action, hoping to snare something. But his prey had eluded him. I didn’t realize as I headed home that though I was functioning, I was in a trance-like, hypnotic state myself.

In order to save energy, my brain must have partially shut down hours ago and narrowed its focus to the dailies only, then not switched back up to wide/normal when I left the cutting room for the real world. Everything I saw I still processed as dailies. Everything around me was fiction. Not an unpleasant sensation. I was floating through a world without consequences. Surfing on a wavelength between layers. I had stepped through the flat screen into a 3-D world of second takes, do-overs and reverse motion. Real life had become just another bin of unwatched dailies. So now, as I drove off the lot, I admired the way the real man about to actually get killed was holding his hands up nice and high. He had a bit of a gut that spilled over his belt.

He pushed his head forward and low, like a silent, pleading turtle. I had stopped my car by this time, in the middle of Gordon Street, and was staring at him a dozen yards away, listening to the music on my car speakers. The minor key blues rhythm worked well with his cadence and the dark mood of his impending death. I followed the vic’s eye line to the men pointing the guns.

There were two of them. They were walking toward him from their black SUV a few feet in front of me. It was the best camera angle I’d seen all night: an over shoulder behind the moving shooters framing their target in a loose cowboy medium shot –head to knees. The gunman on screen right held a 9-millimeter semi-automatic pistol at a 90-degree angle. I shook my head. Why do they do that on the set? So awkward to hold your elbow up that high. Come on. And the other shooter had an AK-47 style semi-automatic partly concealed under his unzipped black hoody. Really? I don’t think it’s realistic to carry that kind of military weaponry on the street. The audience won’t buy it. And their doo-rags are a little much. Two black guys with doo-rags approaching a big, slightly paunchy white guy?

Reads a bit cliche to me. But the deep noir lighting is great and the lone dog barking, gritty. I’ll replace it with a more echo-y, deep-throated pit bull chained up somewhere to emphasize the starkness when I cut the scene. The gunmen must have heard the music pounding through my open sunroof. They whirled around and pointed their 9-mill and semi-automatic through my windshield straight at my face. I could see now, under the streetlight, that it was more of a Kalashnikov. I wondered how black drug dealers and Russian gangsters had crossed paths. “What the FUCK, BITCH!” Two pairs of alarmed, violent eyes stared at me just a few feet away. OH SHIT! I was NOT in my cutting room! I ran the red light on Sunset and floored it up Gower, past the homeless tents and barrel fires under the overpass through another red and up the freeway ramp. I didn’t look behind me until I was merging onto the 101 North. There was no one following me that I could see. I had the freeway largely to myself.

That had been the idea, when I had had one, some hours before. Leaving at 2 a.m., right after the bars close, is too great a risk to be on the road I had thought, so I had another espresso and kept working. And here I was passing just a few long-haul semis with drivers on meth. They flashed their lights, speed freaks telling me to slow down as I cut in front of the coked-out drunks flying home from all-night Hollywood clubs blowing on from Vine. Then I saw a black SUV in my rearview. He was in the murky distance, but gaining on me, mimicking my moves. I flew off at the Universal Studios exit sure I was being followed now. The black SUV ripped off the exit onto Lankershim a hundred yards behind me. A random limo driver? Uber Black? What were the odds?

The guard at the Main Gate waved me through and dropped the draw bridge behind me. He still remembered my car from late nights on Law & Order and gave me a friendly wave. I ducked down a dark alley and drove slowly through the backlot until I had a pulse. I slipped through the open elephant doors of Stage 14 where we had shot Crossing Jordan and looked around for the early grip shift. No one. The lot was still tucked in for the night.

I parked behind a fake garden hedge and got out of my car, listened to the silence and caught my breath. There was no one on my tail now. But we had gotten good looks at each other as they tried to figure out what the hell a middle-aged woman in a white Mercedes with an American Cinema Editors decal was doing in that part of town at that time of night watching a drug deal gone wrong go down. The espresso was wearing off now and I was wondering that too. Fifteen minutes had passed before it occurred to me to call the police. The brief shelf life on the witnessed conflict had expired. The action had gone cold and my report was as useless as it sounded. The vic was dead or he wasn’t by now. I waved to the guard again as I drove home.

The next day I walked out the same back entrance of Sunset Gower at lunch and checked the sidewalk across the street for blood stains. There weren’t any. I Googled murder reports in Hollywood and found nothing. Maybe the three of them had worked it out. Or maybe my arrival on the scene had helped
turtle-man escape. What a fate-tossed and temporary world the three of them must inhabit. It would all end in tears some other night, some other place. I never exited the lot through that gate again. I used the Main Gate on Sunset, despite having to wait to turn left across heavy traffic. I considered renting a car for a while since they had made mine, plates and all, good and proper. A shiny soccer mom wagon is hard to miss in that neighborhood in the wee hours. But nothing came of it. I went back to work and got lost again in the world of fictional crime. Only now I had a much better appreciation for the way a real vic looks when he’s about to die. – © Bonnie Koehler 2017