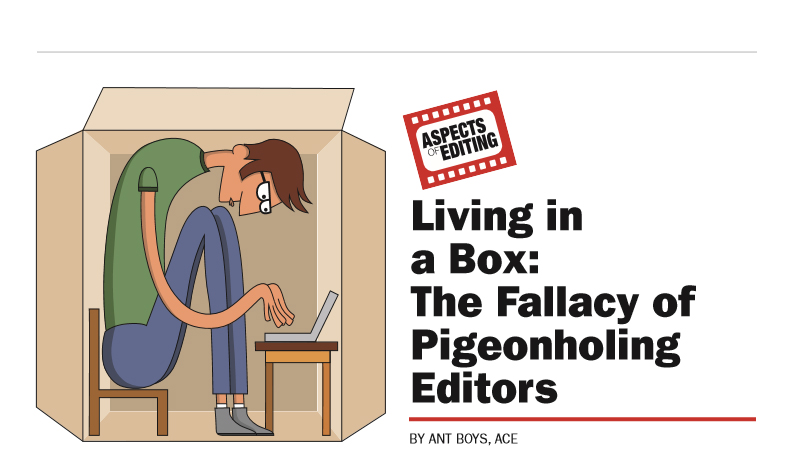 Feb. 1, 2019. A cool Friday L.A. evening. The Beverly Hilton is packed to the rafters with the editing community, breaking out their black ties and cocktail dresses to partake in the annual Eddie Awards. It’s standard L.A. awards show stuff: photographers snapping the famous, hosts cracking jokes, those films and shows you like being listed on a big screen.

D’Arcy Carden is on stage, reading out the winner of Best Edited Drama Series for Commercial Television: Gary Dollner, ACE, for Killing Eve. But this award is a little different. What’s notable here is that Killing Eve is the first drama series Dollner has ever cut. “Myself and my agent made a concerted effort to move into drama about 8-10 years ago,” explains Dollner. “But I always heard the same thing: ‘You’ve got a proven comedy track record, but we’re not sure you can cut drama.’”

A veteran of comedy, Dollner was nominated for an Eddie in 2016 for his work on Veep. But back in his native U.K., he has often been involved with comedy projects that carry real pathos, such as the multi-BAFTA® winning I’m Alan Partridge, and Ricky Gervais’ The Office movie David Brent: Life on the Road. Most recently he cut Phoebe Waller-Bridge’s Fleabag, the heartwrenchingly hilarious tale of a lonely woman trying to cope with tragedy. His work in bringing Fleabag’s characters’ trials to screen has earned him an Emmy® nomination.

“The feedback on social media was overwhelming,” recalls Dollner. “The show has real emotion, and people really connected with that. To label it as ‘just’ a comedy doesn’t do it justice.”

Working with Waller-Bridge and the Fleabag team is the reason Dollner finally managed to make the jump. “When they made Killing Eve, they brought me along, because we’d built a connection and a shorthand in the edit already. There was a trust there.”

So after the jump to ‘a drama’ did Dollner approach the edit in a different way? “No. Not at all. The challenge on Killing Eve was making an exciting drama and teasing out the humor in the script, whilst walking the line between the two.”

Some media outlets have labeled Fleabag a ‘dramedy,’ a relatively new term that was only coined six or seven years ago in an effort to describe shows that didn’t fit into the preconceived ideas of what either genre should be. Shows too funny to be just a drama, and too moving to be just a comedy.

But sitcoms have had a long-standing capacity to make us feel. What about the finale of M*A*S*H*? The episode is built around a therapy session for Alan Alda’s character Hawkeye, where he is forced to recall a repressed memory of a mother smothering her baby to death, after he admonishes her for not keeping it quiet. Or the ending of Friends, where we are left with the empty apartment as they leave for the final time? Or on Fresh Prince of Bel Air, Will Smith’s moving outburst after being abandoned by his father: “How come he don’t want me, man?” Or Niles’ open heart surgery? Or Fry’s dog in Futurama loyally waiting for him to return?

And of course there are all the times drama made us laugh. The Sopranos episode where Chris and Paulie get lost in the woods. Or the pizza on the roof in Breaking Bad. Or anytime in Game of Thrones when the Hound says … that word he says. Or anytime Colombo dropped his ‘Just one more thing.’

In the modern TV landscape, with studios pushing the boundaries and creatives experimenting with how stories can be told, the lines between genres are blurring even further. Take Netflix’s Russian Doll. A rom-sci-fi-drama-horror-thriller-mystery-com. Or more simply labeled by the media under the newly coined ‘Groundhog Day’ genre. To balance the tone in such a piece takes genuine craft, so it comes as no surprise to learn that one of the two editors, Todd Downing, has three BAFTA nominations. What may be surprising is that they are all for Best Current Affairs.

“I had moved to London and got a job with a huge documentary company, and grew with them until I was doing stuff on North Korea, and ISIS, and all these really depressing serious things. But I still wanted to do funny,” Downing recollects.

“So I headed back to New York, and I got a call from someone I had worked with before to come and cut on Difficult People. He pitched me, and talked up my BAFTA nominations, and the network were like, ‘Why do you wanna hire this guy?’ But the showrunner stuck by me and wouldn’t budge.”

Did Downing feel a frustration at the network’s initial refusal to go with the showrunner’s wishes? “I’ve had that before, where people look someone up and see they cut ‘this,’ and people think that’s the only thing you can cut. And a lot of me believes that editing is editing. The rest is just style.

“I really love that I did all that British documentary stuff, because the storytelling on them is so hardcore, with things making sense and clarity. And people who do scripted think that people who do documentaries can’t do scripted. And, you know … [laughs] … scripted is easier.”

Thelma Schoonmaker, ACE, cut the documentaries Woodstock and Street Scenes, then won the Oscar® for Raging Bull. Paul Hirsch, ACE, jumped from horror with Carrie, to action blockbusters with Star Wars and The Empire Strikes Back, to comedy with Ferris Bueller’s Day Off and Planes, Trains & Automobiles. Arthur Schmidt, ACE, was nominated for the Oscar for the biopic Coal Miner’s Daughter, then won the Oscar for the
comedy Who Framed Roger Rabbit?

More recently Tom Cross, ACE, spent years editing commercials, documentaries and reality TV before winning the Oscar for Whiplash. ‘Ah’ the naysayers will cry. ‘These are all film editors. What about TV?’ Well, let me paint you a picture… February 1, 2019. A cool Friday L.A. evening. The Beverly Hilton is packed to the rafters with the editing community, breaking out their black ties and cocktail dresses to partake in the annual Eddie Awards. Jennifer Lewis is on stage, reading out the winner of Best Edited Comedy Series for Non-Commercial Television: Kate Sanford, ACE, for The Marvelous Mrs. Maisel.

What’s notable about this award is many will know her name from her work on dramas The Wire and Boardwalk Empire. “Early on I worked on dramatic films, but growing up I was drawn to comedy and musicals,” reveals Sanford. “My first big show was Sex and the City, which I got lucky with because at the time no one was making TV in New York. Getting that credit was instrumental in opening other doors for me.”

So surely with a season of the most talked about show in America under her belt, hiring an editor of Sanford’s caliber would be a no-brainer for a small indie movie? “I had an interview on the movie Hedwig, which I didn’t get, because I just didn’t have enough experience cutting music.

And then I missed out on other musical work, and it was very frustrating because to me, that was everything.” Often for editors to break out of these labels and explore storytelling in different ways it takes a stroke of good fortune, and often on a show that is at the top of the game in the genre they are established. “Boardwalk Empire was the one that opened things up, because there were a lot of staged musical numbers on that, and it was from there I was able to transition into The Marvelous Mrs. Maisel, Fosse/ Verdon and the musical comedy genre.” says Sanford. “I would still love to work on an actual musical.” Isn’t it time the industry stopped referring to editors as ‘a great comedy editor’ or ‘a great drama editor’ and instead simply refer to them as ‘great editors’?

Surely the mark of a great editor is telling the story in the most entertaining way possible, and knowing what style to use and when? “We cut The Wire using documentary style rules,” explains Sanford. “On Mrs. Maisel we use laser precision editing to get to the comedy. But what I do, and I’m sure so many of us do, is we have this skill of memorizing the dailies, finding things quickly, and telling the best story possible. And that skill set translates from drama to comedy to all genres.”

Perhaps with the new ground being broken by TV, networks and studios will stop putting the craftspeople in such predefined boxes. And while it can hurt as an editor to miss out on a show or film that you know deep down you are right for, doesn’t it hurt the studio more to miss out on the right editor?