ACE In Action – Mentees to Moonlight 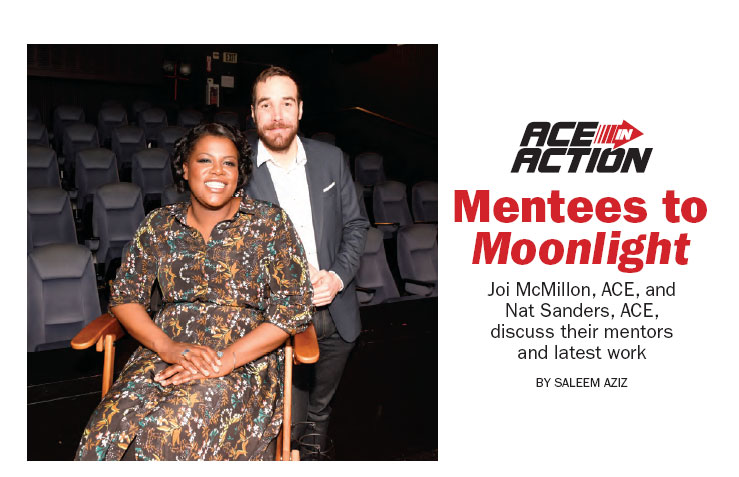 Joi McMillon, ACE, and Nat Sanders, ACE, have enjoyed a career-changing year thanks to their work on Barry Jenkins’ moving Moonlight. The best picture Oscar® winner earned the pair accolades including an Independent Spirit Award®, as well ACE Eddie and Oscar nominations. Since then, the newly-minted members of American Cinema Editors have kept busy.

Sanders’ latest work was The Glass Castle, based on Jeannette Walls’ best-selling memoir, which stars Brie Larson as a young woman who overcomes a difficult childhood and learns to live life on her own terms. Meanwhile, McMillon edited Lemon, the dark comedy about a failed actor, played by Brett Gelman. Sanders and McMillon met while attending at Florida State University. In fact, two teachers at FSU that are ACE members: Daniel H. Holland, ACE, and his wife, Brandi Bradburn, ACE, became early mentors to them both. Sanders’ path to editing was nontraditional as he didn’t assist for very long, therefore not getting that mentoring an assistant editor would get. However, he credits Holland with showing him the ropes, saying, “He really taught me how to cut.” Holland even invited Sanders to edit a documentary that he was making.

Also early on, Sanders became lead assistant editor on reality series The Biggest Loser, and editor Barry Murphy gave him scenes to cut. By the end of the season, Murphy advised him not to take another assistant job, saying he was ready to be an editor. However, Sanders had a hard time landing editing jobs after that,
so Murphy helped Sanders get a job on two separate occasions by speaking with the post supervisors on his behalf. “Because of people like Barry, I try to pay it forward as much as possible to people I see coming up,” Sanders says. On the opposite end, McMillon had a lot of mentors, including FSU professor Bradburn. “I had the chance to work for some amazing editors who still mentor me, like Terilyn A. Shropshire, ACE; Maysie Hoy, ACE; Diana Friedberg, ACE; Nancy Richardson, ACE; and Lori Jane Coleman, ACE.”

Her list doesn’t end, with additional mentions like Paul Trejo, ACE, who helped her get into feature films. After reviewing her resume, he passed it along to Shropshire who hired McMillon as her apprentice editor on Talk to Me (2007). And there is Troy Takaki, ACE, who gave McMillon an honorary ACE Internship Program title – the first of its kind. The year McMillon applied for the ACE Internship Program she didn’t get in.

However, Takaki was impressed by McMillon and lobbied for her to be a part of the program. He called every board member and asked them if he could get her into cutting rooms, and if they would let her be an honorary member – and they agreed. “I’m so grateful for him,” she says. “I met a lot of editors like Tina Hirsch [ACE] and Chris Cooke [ACE] that to this day have been very encouraging to my career.”

Since then, additional honorary members have been given a chance to participate in the program. “It was so great to meet with all of the interns this past year and see how excited they were,” says McMillon. “I’m happy this tradition continues, because with any industry if you can make a connection that helps get your foot in the door it goes a long way.” McMillon’s life changed when Sanders reteamed with fellow FSU student Jenkins on Moonlight and asked her to co-edit the film. After Moonlight, McMillon went on to edit two additional features, a short film and did additional editing on The Glass Castle with Sanders. Lemon, her first film after Moonlight, marks the second time McMillon has worked with director Janicza Bravo. They were first introduced by Kate Hickey who worked with Bravo’s producer, Han West.

After a phone interview Bravo hired McMillon to cut her short film, Man Rots from the Head. They had a great time and formed a strong bond working together, and so Bravo offered her the job on Lemon. “I feel like I’ve known Janicza a lot longer than a year and change. She feels like one of my sisters.” Lemon was a short 18-day shoot with two days of pick-ups. It was nominated for a Sundance audience award and a SXSW Gamechanger Award among others. McMillon also recently cut The Burning Woman, a drama directed by Jake Scott and produced by Ridley Scott. She notes that while very different stories, The Burning Woman and Lemon both share a very authentic human approach.

“The thing I always look for in the story that I’m a part of is how authentic the story is and if the character I’m working with is believable,” she says. “Even though the characteristics of the protagonist may be different, the vehicle that’s taking you from A to B to C is a vehicle I think people can connect to. I think that’s why these films are made and I think that’s why people want to watch them.”

Following Moonlight, Sanders began work on The Glass Castle, with a 40-day shooting schedule and 11-month journey from production through the end of post. Sanders previously worked with the film’s director, Destin Daniel Cretton, on a feature called Short Term 12. Sanders saw Cretton’s short film of the same name back in 2008 and loved it. As fate would have it,the two met at Sundance through a mutual friend. Once Sanders confessed how much he loved his work, to his surprise Cretton returned the admiration and confessed he was a fan of two films Sanders cut. That was the moment Sanders created a relationship that would propel him to editing his first studio film with that director. The first cut of The Glass Castle – which is very episodic and covers several decades – came in at three hours and five minutes, but after working for six months in the cutting room with Cretton, Sanders took the film to its final running time of one hour and 58 minutes. “I love working with a director after making my first pass,” he says. “With two people in the room you will come out with a better film.”

In getting the film down they found that honing the narrative threads would keep the pace of the film and make it feel stronger, which resulted in a lot of cut scenes. McMillon and Sanders seem poised to serve as role models
and inspiration to the next generation of ACE members. Meanwhile, the pair are back to work, co-editing Barry Jenkins’ next film, If Beale Street Could Talk.