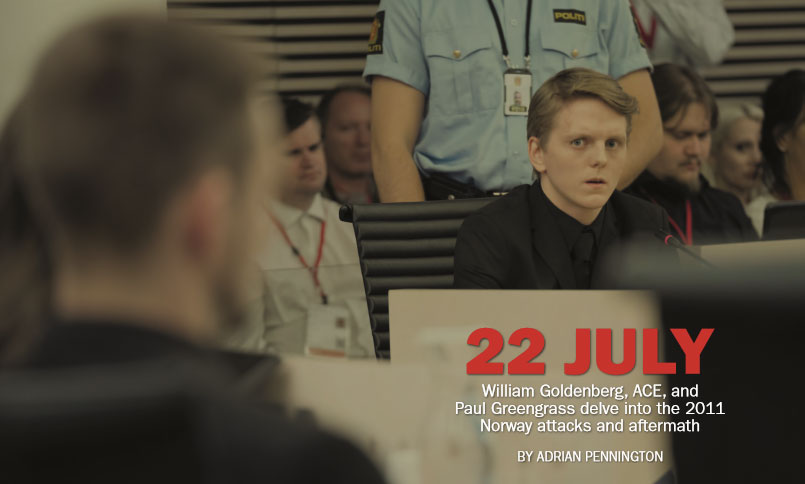 The shocking events of 22 July 2011 when 77 people were massacred in Norway by a far-right extremist is the subject of director Paul Greengrass’ latest drama. He produces his own screenplay based on the book, One of Us, by Åsne Seierstad (who shares writing credit) for Netflix distribution.

In the opening scenes we see teenagers arriving to the island of Utøya, for the Norwegian Labor party’s annual youth summer camp. Sixty-nine of them will not survive the day, murdered by Anders Breivik who had earlier killed eight people by car bomb in Oslo. Drama 22 July, though, mostly concerns the aftermath and recovery of the country by focusing on the recovery of Viljar Hanssen (Jonas Strand Gravli), one of those seriously injured in the event.

William Goldenberg, ACE, first learned of Greengrass’ interest in working with him while helping finish Ocean’s 8 in New York. The opportunity to work with the director of Captain Phillips and United 93 as well the subject matter of the project were too good to pass.

“I’ve tried to work on films that have something to say politically throughout my career and what I saw in Paul’s script was an attempt to make a statement about how a nation can recover from trauma without turning toward the same hate that the ‘alt-right’ draws on,” he says.

Greengrass began his career shooting reportage and hardhitting documentaries for UK broadcast and subsequently married some of the same techniques with dramatic fiction to make films grounded in real events. “What is great about approaching this event as a narrative feature rather than a documentary is that the story becomes global.

All the cast and all the crew are Norwegian [apart from director and editor] but Paul decided to shoot it in English which immediately widens the universality of the story. The rise of the ‘alt-right’ is not a uniquely Norwegian or European or U.S. problem. This is a global problem.” 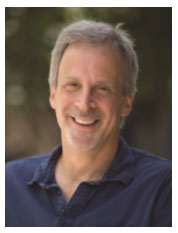 Goldenberg was on location in Oslo for seven weeks for the bulk of principal photography, during which time he met with many Norwegians. “Everyone remembers where they were, how they felt, what they were doing. It is scarred on their consciousness,” says Goldenberg. “I think being in their presence day in, day out for weeks helped us better understand the story we were telling.”

While 22 July is shot by Pål Ulvik Rokseth, Greengrass’ regular cinematographer, Barry Ackroyd is also a frequent collaborator of director Kathryn Bigelow, with whom Goldenberg has made Zero Dark Thirty and Detroit – both films plucked from the headlines. “I am used to handling the volume of material that has been shot verite style, where one take is not the same as any other and where the camera-operators are finding shots in a room,” says Goldenberg. “Often it’s not standard coverage but then we’re trying not to make a standard film.”

The pace of 22 July varies. The opening scenes establish who the main players will be: politicians, the kids going to camp, their parents, Breivik. The attack on the island is presented in familiar Greengrass shooting style ‘freeform and kinetic’ while the remaining two thirds of the film, which moves onto personal and national recovery, “gets a little more conventional.”

“Even here, though, the camera is moving around, finding angles,” he says. “I find it easier and more satisfying to work with all of these different choices than with close-up, mid-shot, closeup conventions because it is easier to enhance the footage. Also, where there are issues – which there will inevitably be in any film – it is easier to manufacture moments where you have more granular control over the footage.”

The filmmakers were extremely conscious not to mishandle the story and inadvertently hand Breivik the publicity he was seeking. “We tried to be as careful as possible not to be incendiary but to present this story fairly and let the audience come to a conclusion,” says Goldenberg. “There’s a moment we depict when Breivik gets to speak in court. He says things which are uncomfortable to listen to but by showing the reaction of people to his words, you see how disgusting and hateful it is. We are able to do that without getting up on a soap box and preach about it.” 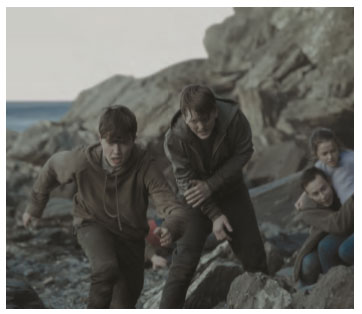 After shooting over winter in Oslo, the crew shot scenes near Reykjavik, Iceland which doubled as Svalbard in the north of Norway and scenes of Viljar’s home with Greenberg relocating to edit in London. In Oslo, Greengrass and his editor would spend a couple of hours each evening going over the next day’s shoot, feeding back on dailies and altering the script. “I’m not included in those discussions all the time with other directors who may have a different work method but I found this incredibly satisfying and collaborative. By the time he had completed shooting in Iceland I had a first assembly to show him. It wasn’t just him and [me] in the screening, which would be normal, but also his script supervisor, Zoe Morgan, first AD Chris Carreras, [producer] Gregory Goodman and associate producer Emily Evans-Thirlwell.

This shows what kind of trust he has in collaborating. We could see there was a film there and that it was very emotional but it needed work.” Post-production was tight, with three months to complete, including the addition of 150 VFX shots. “I had to hit the ground running and make decisions very quickly. Rather than micromanage every cut, Paul prefers to keep his objectivity and distance from the cutting room which left me a lot of freedom to shape the material.”

The attack sequence on Utøya itself was the most difficult to assemble, for emotional and editorial reasons. It winds up shorter in the film than originally conceived. “In the script most of the sequence focuses on the assault as if it were insulated from the outside world,” he explains. “In reality, the kids were able to phone their parents and alert authorities. But by presenting the reaction of the government, the police and parents after the event it felt as if we were holding up the story. It did take a long time for the Norwegian Delta Force to come to their aid but incorporating the knowledge the outside world had about what was happening gave the scene an underlying race against time.

It essentially felt more realistic to have the outside world aware of what was unfolding.” In addition, Goldenberg had to puzzle a way around a section of the script for this scene which a confluence of scheduling, budget and bad weather had made impossible to film. “In the script, Viljar and his brother along with several others attempt to escape by swimming across the channel between Utøya and another island. Small private boats from the other island were supposed to sail out and make the rescue but the weather was so bad that the shoot was delayed until the Spring.

By that time, we realized that the story should culminate with Viljar getting shot and calling his mother and father. We decided to figure a way of abbreviating the ending so as not have to shoot all that water work. “Ending the sequence this way felt very immediate but building the scene to that point was very challenging. As the shoot progressed I would go back and add in little pieces and different story beats.

It was always in flux and I wasn’t able to shape the whole sequence until the last day of shooting in Oslo.” Goldenberg’s experience cutting the escape scene in Argo (for which he won an ACE Eddie Award and Oscar®) helped him devise a route “in the sense that in both scenes you are cutting away to several different story strands but you want the audience on the edge of their seats. They are completely different stories, of course, but stylistically they are the same.” The filmmakers were also concerned that the sequence was too lengthy and too harrowing for an audience to sit through.

The sound design is intentionally rough and ragged, the cellobased score subtle and personal. “The aim was to express the horror and adrenaline rush of what it must have been like to be so near to death but by making it feel real and grounded rather than using editorial trickery.

We tried to be discrete about the violence and to concentrate on Viljar and his brother and less on the other children – yet it’s so intense when you watch it. A big part of our mission was to be respectful to all the families.”